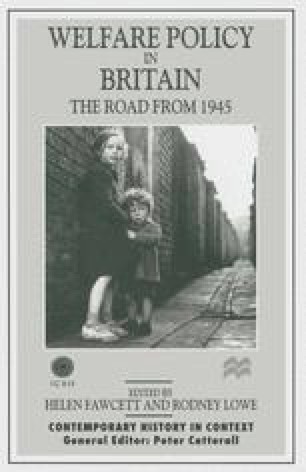 The National Assistance Board and the ‘Rediscovery’ of Poverty

This chapter reports for the first time on a unique review of the adequacy of the United Kingdom’s social assistance benefit levels, carried out in the early 1960s. Even before the foundation of the Child Poverty Action Group (CPAG) in 1965, an increasing number of reports were publicly ‘rediscovering’ the persistence of poverty. They were also suggesting that the incomes of recipients of National Assistance (NA) were inadequate, in the sense that they were insufficient to meet national standards of minimal social participation.1 The review was the means by which the National Assistance Board (NAB) privately sought to test these criticisms. Its singularity is that it is the only empirical study of adequacy ever carried out by officials within a government department, as opposed to external researchers. Perhaps because it confirmed that the social reforms of the 1945 Labour Government had not abolished poverty, the report was neither published nor subsequently referred to.2 No further attempt to test the adequacy of income maintenance benefits, or even to set adequacy standards, has been made by any UK government to the present day.

Social Security Poverty Line National Assistance Benefit Level Regional Controller
These keywords were added by machine and not by the authors. This process is experimental and the keywords may be updated as the learning algorithm improves.
This is a preview of subscription content, log in to check access.