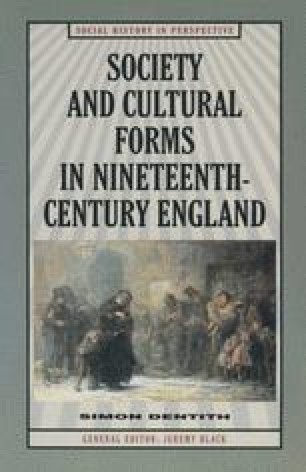 ‘Society’ and ‘cultural form’ — the terms ‘culture’ and ‘society’ are not far to seek in my title. This book addresses culture and society in the nineteenth century, and its topic is essentially a relationship: between the realities of nineteenth-century society in England, and the extraordinary range of cultural objects, of all kinds, produced within that century. But this relationship is difficult to specify, for a variety of reasons. Firstly, it is a relationship between two entities which are constantly transforming themselves and whose definitions are, anyway, difficult and controversial. Secondly, the very effort to specify a relationship between ‘society’ and ‘culture’ tends to make both entities too rigid, to presuppose a separate reality for each — and thus to indicate a way of conceiving the relationship which ought precisely to be the matter for inquiry. Let me say immediately, then, that no society is conceivable without a culture, and indeed that no culture is conceivable without a society to sustain it. In fact, one of my central contentions in this book will be that social relationships are partly realised in culture, and that culture is a space in which such relationships are both cemented and contested. Moreover, my topic is historically located in the nineteenth century, in a country, England, undergoing remarkable transformations, so that social relationships were in a state of constant tension and renegotiation; culture is both one of the means of this renegotiation, and the particular valuations made within culture are some of its products.