Women of Faith in Victorian Culture 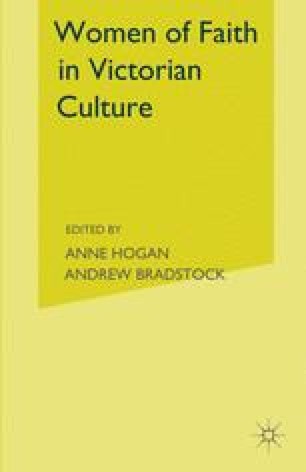 The Angel in the House of Death: Gender and Identity in George MacDonald’s Lilith

This chapter seeks to address the theme of the ‘Angel in the House’ by exploring the representation of the female (and specifically the maternal) in Lilith, the fantasy novel by George MacDonald. The relevance of this approach to the theme is corroborated by Barbara Koltuv’s The Book of Lilith, when in the chapter ‘Lilith and the Daughters of Eve’, she cites in extenso the passage in Virginia Woolf’s essay ‘Professions for Women’ in which she talks about the need to kill the Angel in the House. Koltuv is a Jungian analyst who talks of ‘the war between Eve and Lilith,’1 or in less oppositional language ‘the [endless] cycle of alterations between the Lilith and Eve aspects of woman’s psyche’.2 Another Jungian analyst, Siegmund Hurwitz, has taken Koltuv to task in his Lilith — The First Eve, ostensibly for scholarly inadequacies, but by implication as one of those who overlook the point that the Lilith material is ‘above all about the anima problem of the Jewish male’,3 and ‘only applies externally ... to the real woman in a secondary fashion’.4 While I myself resist conversion to the Jungian gnosis, nevertheless I find it difficult to resist the analogy that George MacDonald’s Lilith is about the problem (call it ‘anima problem’ if you will) of a Scottish male.

Male Image Symbolic Order Real Woman Immortal Life Pyrrhic Victory
These keywords were added by machine and not by the authors. This process is experimental and the keywords may be updated as the learning algorithm improves.
This is a preview of subscription content, log in to check access.