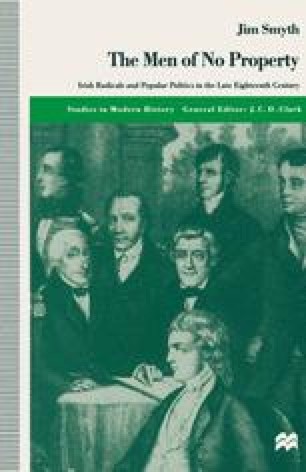 The year 1794 has been characterised as a lull in the overcrowded history of the 1790s.1 The reason is obvious. Coming after the catholic and reform campaigns of 1791–3 and before the dramatic sequence of events which led from Fitzwilliam’s dismissal in 1795 to rebellion in 1798, this year has indeed an appearance of ‘comparative calm’. Taking into account the attendance figures at meetings of the Dublin Society of United Irishmen which began to decline in April 1793, the seeming fall-off in political activity — the ‘lull’ — might even be extended to eighteen months. In fact those eighteen months were formative in the development of the revolutionary movement. Political activity did not diminish, rather it was rerouted into clandestine channels. For example, almost all of the evidence relating to the Philanthropic Society, a major component of Dublin’s political underground before it merged into the United Irish movement, comes from 1794. In both Ulster and Dublin the United Irishmen began organising as a secret society late that year. If this decade is approached through the history of the Defenders, moreover, the notion of a lull becomes even less tenable. A major Defender riot occurred in Cavan in May, 1794, and in August Westmeath magistrates met to discuss ‘the late violences’ in the county.2 In the arena of popular direct action there was no ceasefire.

Political Connection Secret Society Defender Activity Revolutionary Movement Catholic Clergy
These keywords were added by machine and not by the authors. This process is experimental and the keywords may be updated as the learning algorithm improves.
This is a preview of subscription content, log in to check access.