Michel Foucault and the Games of Truth 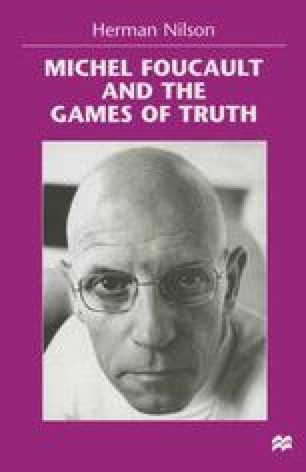 Technologies of the Self

Foucault researched the portrayal of history which revealed the various ways that people in Western culture developed a knowledge of themselves. With the examples of medicine, psychiatry, punishment and other areas, he had tried to show that the institutions and so-called scientific discourses he examined are not something inevitable that must be accepted,1 but can be analysed as ‘very specific “truth games’” (TS 18); games which are based on concrete techniques, by which man strives to attain an understanding of himself. Here Foucault differentiated between four main types of technologies: ‘(1) technologies of production, which permit us to produce, transform, or manipulate things; (2) technologies of sign systems, which permit us to use signs, meanings, symbols, or signification; (3) technologies of power, which determine the conduct of individuals and submit them to certain ends or domination, an objectivizing of the subject; (4) technologies of the self, which permit individuals to effect by their own means or with the help of others a certain number of operations on their own bodies and souls, thoughts, conduct, and way of being, so as to transform themselves in order to attain a certain state of happiness, purity, wisdom, perfection, or immortality’ (TS 18). In his late studies on a history of sexuality, beginning with the first volume La Volonté de Savoir, a book which was still concerned with the technologies of power, but which already cast doubt on power’s one-sided, repressive ruling structure, Foucault had dealt with that fourth type of ‘self-technologies’; those which are no longer connected to particular forms of knowledge or institutions, but which have validity ‘in all societies, whatever they are’.2

Moderate Dealing Truth Game Concrete Technique Christian Counterpart Ancient Ethic
These keywords were added by machine and not by the authors. This process is experimental and the keywords may be updated as the learning algorithm improves.
This is a preview of subscription content, log in to check access.