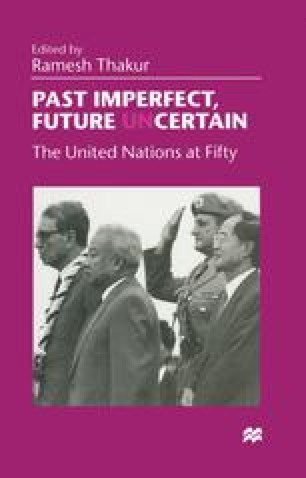 Global Governance and the United Nations

‘Global Governance’ is a term which has been given sufficient currency to warrant its use as a title of a new academic journal. However, it is a term which is used in many different ways. Anyone with a serious interest in international relations and international organisation knows what it means, yet it does not have a scientific meaning. What then are its component parts? First, global governance is multipolar in nature. It encompasses a wide range of differing actors, such as states, international organisations (government and non-governmental) and a plethora of transnational actors such as multinational corporations and think tanks. These actors contribute to the essential multidimensionality of the notion, for they broach questions of a political, economic, social or cultural nature. Their interactions have given rise to what is in effect a decentralised public process which is related to the governance of global civil society. The outcome of this process is a set of norms, rules and. decisions which are directed towards the management of global issues. These public and private bodies interact in both a formal and informal manner to create procedures which focus on a range of issues that necessarily concern everyone. Global governance is necessary because there are global issues from which no one can escape, although the incidence may be different for each. For example, the rich may be able to protect themselves against the worst ravages of environmental degradation, but only at a price, so they too are necessarily involved in what is a truly global issue.

Security Council Global Governance Global Issue North American Free Trade Agreement International Peace
These keywords were added by machine and not by the authors. This process is experimental and the keywords may be updated as the learning algorithm improves.
This is a preview of subscription content, log in to check access.