Beyond the Developmental State 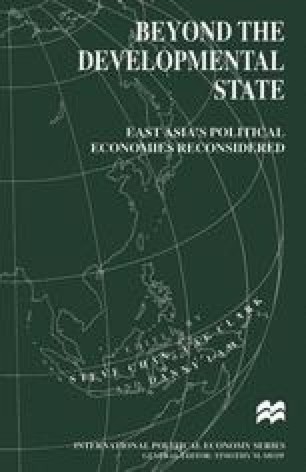 Japan's Model of Economic Development: Will it Work in the Future?

National boundaries continue to shrink in importance as the pace of economic development quickens. The globalization of business, the spread of computers, and the openness of communication are driving development at a pace never before imagined. Britain needed nearly sixty years to double its output per person beginning in 1780. It took Japan thirty-four years starting in the 1880s and South Korea only eleven years after 1966. Economic development has caused industrial leadership to shift from continent to continent and from developed to newly industrializing nations. We have seen shipbuilding move from lumber-intensive countries like the United States, to steel-producing countries like the UK, to efficient manufacturing countries like Japan and Korea. Technological leadership in automobiles and semiconductors has shifted from the United States to Japan; semiconductor production has moved from Japan and the United States to Korea and Malaysia; and some advanced technology industries have moved into China and the Southeast Asian nations.

Competitive Advantage Japanese Firm Trading Company Foreign Technology Debt Capital
These keywords were added by machine and not by the authors. This process is experimental and the keywords may be updated as the learning algorithm improves.
This is a preview of subscription content, log in to check access.