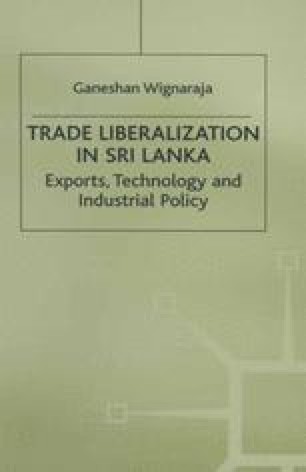 Compared to other developing countries in Asia, Sri Lanka was a relative latecomer to export-led industrialization through the growth of manufactured exports. The production of manufactured exports began to be emphasized as a serious objective in the country’s development strategy only in the mid-1970s. For over a decade after independence in 1948, the economy was based on an export-oriented plantation sector and a subsistence agricultural sector, inherited from the colonial era. Traditional export taxes were the major source of government revenue which was used to finance the extensive consumer subsidy system. By the end of the 1950s, Sri Lanka was reputed among developing countries for its social achievements but its level of industrialization was very low.1 Balance of payments problems and ideological influences in the early 1960s led to a shift in the development strategy towards an inward-oriented trade strategy based on import substitution.

Real Exchange Rate Trade Strategy Trade Liberalization Technological Capability Capital Inflow
These keywords were added by machine and not by the authors. This process is experimental and the keywords may be updated as the learning algorithm improves.
This is a preview of subscription content, log in to check access.