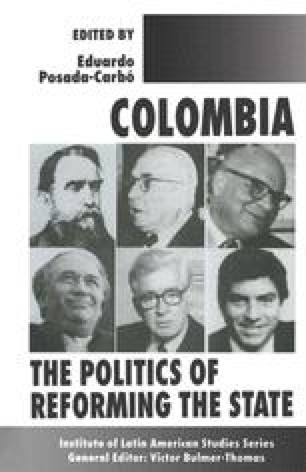 Evolution and Rationality of Budget Institutions In Colombia

The independence of central banks has an effect on the macroeconomic results of economies and ultimately on inflation.1 A similar relationship may exist between budget institutions and the fiscal performance of governments: budget institutions may have a bearing on fiscal results.2 There is evidence that indicates that budgetary procedures favouring a stronger position of the budget authority vis-à-vis other members of government, or giving more power to the executive, lead to greater fiscal discipline.3 Eichengreen has found that ‘a number of measures of balanced-budget restrictions are significantly associated with larger surpluses (smaller deficits)’4 in the state fiscal accounts in the United States. Poterba observed that rules and political factors, such as the control of one party over the state legislature, are important in explaining differences in fiscal performance between different states in the United States.5

Fiscal Policy Real Exchange Rate Trade Balance Nominal Exchange Rate Fiscal Deficit
These keywords were added by machine and not by the authors. This process is experimental and the keywords may be updated as the learning algorithm improves.

The author was a consultant for the Office of the Chief Economist of the Inter-American Bank at the time of writing this paper. This chapter is part of a research project concerning the effect of budget institutions on the fiscal performance of Latin American countries conducted for this office by Alberto Alesina, Ricardo Hausmann, Ernesto Stein and the author.