The Spectre of Babeuf 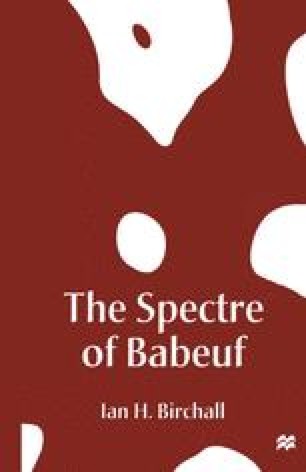 If an equal society, based on democracy and plenty, was the goal, how was that goal to be reached? Rose argued that ‘Babeuf began as a practical revolutionary and ended as a Utopian dreamer’; and claimed that the conspiracy was: ‘the most extreme reaction of traditional classes during the revolution against the challenge of accelerating capitalism, rather than … the harbinger of a new, progressive, socialist economic order.’1 There is quite a lot of evidence to the contrary. Utopian dreamers were not seen as much of a threat, either before or after 1789, and they were not usually put to death. What gave Babeuf his specific place in the history of socialism was precisely his concern to unite theory and practice.

Traditional Classis Unskilled Worker Wage Labour Class Struggle Skilled Artisan
These keywords were added by machine and not by the authors. This process is experimental and the keywords may be updated as the learning algorithm improves.
This is a preview of subscription content, log in to check access.