From Soapbox to Soundbite 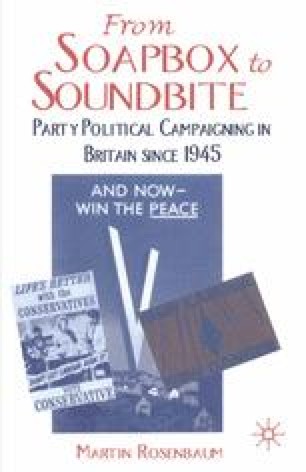 Political rallies were an early form of mass communication. As the electorate grew in the nineteenth century due to the extension of the franchise, and as election campaigns evolved from individual local battles into a coherent nationwide conflict, political leaders found they had to take their case to growing numbers of voters. The efficient way to do this was to gather them together in one place. Large public meetings, both indoors and outdoors, became a crucial means of electioneering, attended often by thousands and sometimes by tens of thousands of people.

Political Speech Political Message Political Rally Block Vote Labour Politician
These keywords were added by machine and not by the authors. This process is experimental and the keywords may be updated as the learning algorithm improves.

People want to have a good time when they come and listen to a political speech.

Tonight’s rally is the last before election day and we need your help to ensure its success. This envelope contains a skip hat, Union Jack and party popper. Please keep this with you and do not use any of the contents until the end of the rally. Immediately after the prime minister’s speech he will be joined on stage by Mrs Major. By this time you will very likely be on your feet applauding and at this stage please put on your hat, wave your flag and explode your party popper.

Instructions to audience placed on each seat at Conservative election rally, 19922

I was sitting next to Robin Cook and … Robin said, ‘I don’t think this is going to work.’ I said, ‘It did in Nazi Germany.’