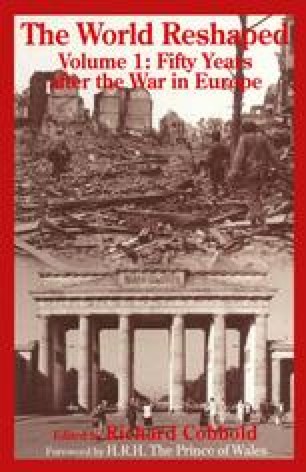 Compendium of Articles From The RUSI Journal 1945–1989

Since it was first published in 1858, the Journal of the Royal United Services Institute has been able to publish lectures and articles from contemporary leading practitioners and thinkers in military science, defence and security studies. The extracts below have been taken from Journals over the years since the end of the Second World War. So quickly has the Cold War passed into history that the fears and perspectives that characterised the period now appear remote and almost alien, especially to a generation growing to consciousness in the wake of the fall of the Berlin Wall. The selection below charts the shifting developments of allies into enemies, the spread and escalation of the arms race and growth of deterrence, and changes in strategic thought which have shaped British and Alliance policy since the end of the War. It is by no means a comprehensive selection, but aims to give a flavour of the era and the debate that took place over the years, both serious and somewhat whimsical. The framework has been taken from immediately after the War, starting with a discussion of the military government in Germany, to 1989 with the historic meeting at the RUSI of the respective heads of NATO and the Warsaw Pact, General Galvin and General Lushev. It is the road to that watershed that we have tried to recall and document here. If some of the concerns seem familiar, plus ça change…

Nuclear Weapon Defence Policy American Policy Soviet Leader Nuclear Deterrence
These keywords were added by machine and not by the authors. This process is experimental and the keywords may be updated as the learning algorithm improves.
This is a preview of subscription content, log in to check access.