Music in the Third Reich 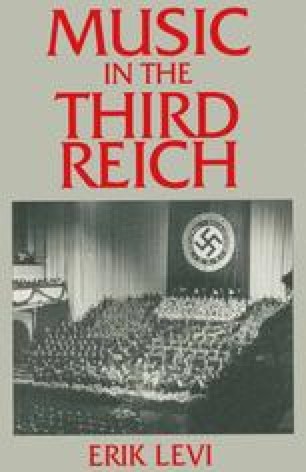 Responding to the Market: Music Publishing in the Third Reich

The evolution of music publishing within a specific historical period has not, on the whole, received such detailed investigation as some other complementary forms of musical activity. It is difficult to offer a satisfactory explanation for this state of affairs. Perhaps one reason may be a tendency in musical scholarship to concentrate our attention almost exclusively upon the artistic value of a published composition, and thus ignore its importance as an article of merchandise. Such an emphasis may well have originated in the nineteenth century, when some composers postulated the belief that they were creating ‘art for art’s sake’, rather than satisfying the demands of public taste. But while individualism of this nature may have been a feature of the nineteenth-century ethos, for the majority of creative musicians of the period the process of writing music was conditioned as much by financial considerations as by artistic impulse. In this respect the vast expansion in music publishing, which occurred during the nineteenth century, gave the publisher a role of ever-increasing significance in musical life. Whether publishers operated purely as businessmen capitalising upon the fashions of the moment, or looked to the future and supported composers whose work had not yet found a receptive audience (and it must be emphasised that these two parameters of activity were by no means mutually exclusive), their influence in determining the course of musical history should not be underestimated.

Publishing House Musical Activity Nazi Regime Weimar Republic Exclusive Contract
These keywords were added by machine and not by the authors. This process is experimental and the keywords may be updated as the learning algorithm improves.
This is a preview of subscription content, log in to check access.