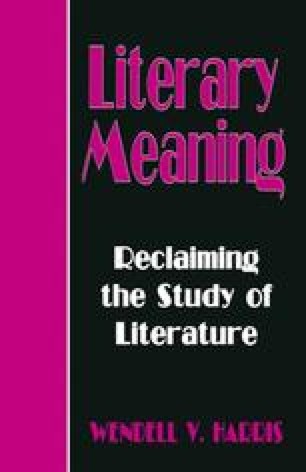 “Literary history” is a phrase used so confidently one might think it neither problematical nor controversial, but it is in fact so particularly likely to lead the unwary into confusion as to deserve a chapter to itself. Indeed the last half-century has produced a cautionary series of attempts to bring order to this complexly recalcitrant topic.1 The first difficulty is the same found pretty generally throughout literary commentary: the failure to take account of the different senses in which a key term is used. One finds many an essay seeking to contrast literary history with criticism, or dividing it into types, or giving warnings about its pursuit, but few of these offer an explicit definition of the thing itself. As most often used, the term mixes together several distinct kinds of activity while pronouncing generalizations about the whole that properly apply to only one of these activities. Jerzy Pelc does not exaggerate when he comments that “literary history” has been variously used to mean “‘pure’ literary history, literary theory, the sociology of literature, the psychology of literature, the semiotics of literature, the methodology of literary history, the methodology of literary theory, elements of aesthetics, elements of the history of culture, elements of the philosophy of culture, elements of ethics, elements of such disciplines as sociology, linguistics, psychology, political and economic history, etc.” (90). Moreover, it has often meant one or another mixture of these.

Literary Work Literary Theory Literary History Intended Meaning Literary Text
These keywords were added by machine and not by the authors. This process is experimental and the keywords may be updated as the learning algorithm improves.

The conscious implication of Flaubert’s Parrot is that since we cannot know everything about the past we cannot know anything; but its actual effect — and its success — is to suggest something different: that the relative confirms the idea of truth instead of dissipating it, that the difficulty of finding out how things were does not disprove those things but authenticates them.

John Bayley, The Order of Battle at Trafalgar, 12.