British Military Planning for the Defence of Germany 1945–50 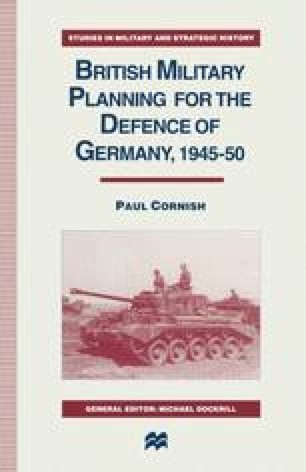 With Germany’s defeat, Britain’s relationship with its former adversary immediately took on an entirely different character. In its zone of occupation, Britain now became wholly responsible for social, political and economic affairs. While many military tasks attended Germany’s defeat, tasks which were carried out using military resources and Montgomery’s command structure, the whole panoply of civil affairs planning and organisation, which had been in preparation for so long in Britain, was now brought into effect.2 The military had also been preparing for some time for Germany’s defeat. Yet VE Day did not mark a complete and sudden change of attitude on the part of the COS and their planners. With the exception of a tentative involvement in US planning for war in Germany in the short term, British military thinking and strategic planning for Germany in the immediate aftermath of the war were characterised more by caution and incoherence than by anything pro-active and far-sighted.

Strategic Plan Middle East Emergency Planning Defence Policy Counter Blow
These keywords were added by machine and not by the authors. This process is experimental and the keywords may be updated as the learning algorithm improves.

The immediate problem that now faced us was terrific. We had in our area nearly one and a half million German prisoners of war. There were a further one million German wounded & about one million civilian refugees ... and “Displaced Persons” were roaming about the country ... Transportation and communication services had ceased to function. Agriculture and industry were largely at a standstill.

I was a soldier and I had not been trained to handle anything of this nature.