The Management and Practice of Public Relations 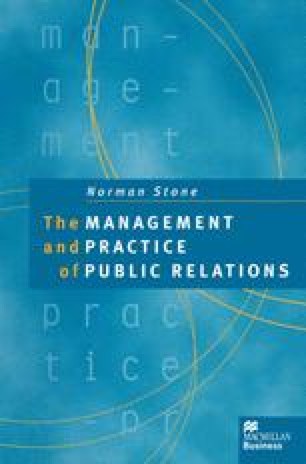 In January 1994, the Department of National Heritage confirmed that it would spend £1m on two campaigns to do with the 50th anniversary of the D-Day landings of June 1944. One campaign, in the USA, was to be handled through the British Tourist Authority. The other, UK based, was to be ‘a major high profile campaign through a coordinated series of events involving people of all ages, including schoolchildren, across the country’. At best the briefing for potential consultancies could be described as vague, with no clear guidelines on costs. The winning agency was expected to ‘advise on and implement this campaign…act as a clearing house for ideas; establish contacts with the commercial world, seeking sponsorship where appropriate, and come up with good ideas’. The Department was quoted as telling a consultant, ‘We’re talking about half a million [pounds] but just put in what you think.’ As PR Week pointed out at the time, ‘all this had to be achieved with just 19 weeks to go before the D-Day Anniversary. By calling on extra reserves of Dunkirk spirit it will get done, of course… but the Heritage Department’s approach smacks of amateurism.’ Lowe Bell Communications won the account. It was reported that their fee was £62 500. If so, they certainly earned it.2

There are only two sorts of management decision that matter — the ones about money, and all the others.