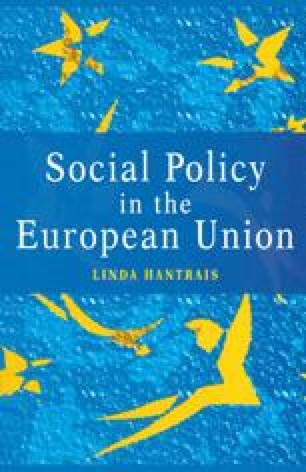 The emphasis on employment-related rights in the Community’s and Union’s Treaties and Charter meant that attention was focused on the need to protect workers against major sources of hardship due to incapacity for work as a result of ill health, disability, unemployment, old age and other contingencies. At the time when the Treaty establishing the European Economic Community (EEC) was signed in 1957 [1.2], member states were experiencing a period of economic expansion. Following the German ‘continental’ model, their welfare regimes were based on the premise that earnings from paid employment would be sufficiently high to enable workers and their families to enjoy a decent standard of living (see Chapter 2). Some provision was made for those who temporarily ‘fell through the net’ by progressively instituting non-contributory social assistance schemes, but in the postwar boom years the groups considered to be at risk were relatively limited, and unemployment was not seen as a problem area. When the EEC Treaty was signed, many older people, particularly the self-employed, had not accrued the right to generous earnings-related pensions, and not all occupations were subject to a legal age of retirement. In addition, life expectancy was shorter, and the proportion of elderly dependants was therefore relatively small (see Chapter 7).