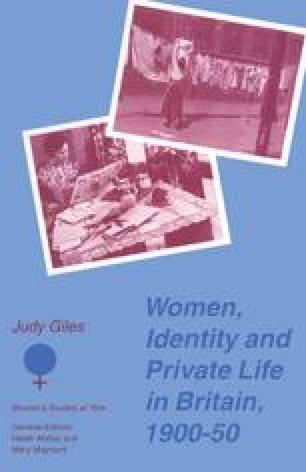 A Home of Their Own

Muriel Jones, who grew up in a Birmingham suburb in the 1920s, was often taken by her father to visit relatives in the city centre. Her accounts of these visits are couched in the language of those late-Victorian explorers of the London slums for whom such visits were forays into an alien region (Keating, 1976, p. 14; Walkowitz, 1992, p. 19). According to Muriel ‘the houses seemed very queer to me’ and ‘they used to fascinate me’. Muriel’s comments draw on cultural narratives of urban exploration in which the slum areas of large conurbations were constructed in terms of both the horror they aroused and, in equal measure, the fascination experienced in scrutinising them. For the child, Muriel, it was fascination that predominated, the fascination with differences not only of topography and housing but, embodied in this, ways of living. In the 1920s the urban areas of Smethwick and Aston visited by Muriel were a jumble of small workshops and back-to-back housing, crisscrossed by a network of canals and railways lines (Bournville Village Trust, 1941; Briggs, 1952, p. 284). In contrast, Rednal, where Muriel grew up, was a suburb, eight miles from Birmingham’s city centre at the end of the new tram line opened in 1924. Bounded on one side by the Lickey Hills, owned and developed by Birmingham Corporation and the Cadbury Brothers as a leisure area for the city’s inhabitants, and on the other by the open countryside of Worcestershire, Rednal’s only concession to industry was the fast growing Austin Motor Company (Austin Motor Company, 1938; Briggs, 1952, p. 284; Tupling, 1983).

Private Life Slum Dweller Class Woman Cultural Narrative Official Discourse
These keywords were added by machine and not by the authors. This process is experimental and the keywords may be updated as the learning algorithm improves.
This is a preview of subscription content, log in to check access.