Philosophy and the Grammar of Religious Belief 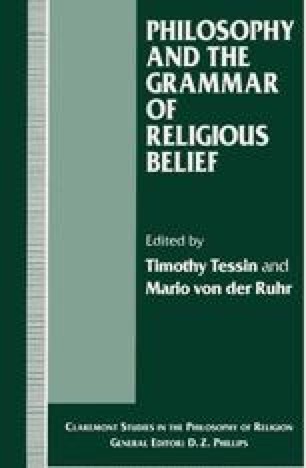 Putting Two and Two Together: Kierkegaard, Wittgenstein and the Point of View for Their Work as Authors1

This paper is a commentary on its two epigraphs. It is about both the reasons why and the ways in which Kierkegaard and Wittgenstein attempt to remain faithful to the injunction expressed in these epigraphs. It is therefore about why their writing comes in the shape that it does.

Religious Life Religious Person Religious Concept Religious Category Ordinary Belief
These keywords were added by machine and not by the authors. This process is experimental and the keywords may be updated as the learning algorithm improves.

I am indebted to questions raised by participants at the Claremont Conference honouring the appointment of D.Z. Phillips as the Danforth Professor of the Philosophy of Religion, to comments on an earlier draft from Cora Diamond, Paul Franks, Logi Gunnarsson, Martin Stone and Lisa Van Alstyne, and to an unpublished manuscript by M. Jamie Ferreira.

It is thus left to the reader himself to put two and two together, if he so desires, but nothing is done to minister to a reader’s indolence.

Anything your reader can do for himself leave to him.

Cite this chapter as:
Conant J. (1995) Putting Two and Two Together: Kierkegaard, Wittgenstein and the Point of View for Their Work as Authors1. In: Tessin T., von der Ruhr M. (eds) Philosophy and the Grammar of Religious Belief. Claremont Studies in the Philosophy of Religion. Palgrave Macmillan, London. https://doi.org/10.1007/978-1-349-23867-5_11