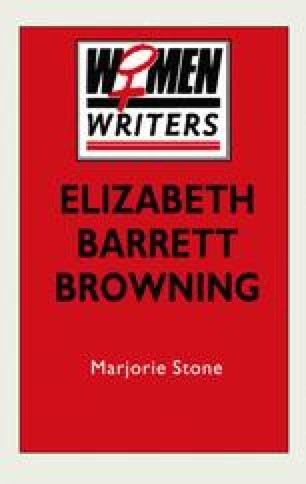 The Scene of Instruction: Romantic Revisionism

‘Byron, Coleridge … how many more? … were contemporaries of mine without my having approached them near enough to look reverently in their faces … and young as I was, I cannot get rid of a feeling of deep regret that, so, — it shd. have been’ (BC 7:319). Elizabeth Barrett was born in 1806 eleven years after Keats and six years before Browning. Her first published works, The Battle of Marathon (1820) and An Essay on Mind, with Other Poems (1826) pre-date the appearance of Tennyson’s juvenilia in Poems by Two Brothers (1827). Her formative years therefore belong to the Romantic, not the Victorian period. But her affiliations with Romantic poets and traditions have been largely unexplored, with the exception of her connections with Wordsworth. Dorothy Mermin’s conclusion that for the young Elizabeth Barrett ‘as for the young Matthew Arnold Romanticism meant mostly nature poetry, especially Wordsworth’s’ (63), is shared by Angela Leighton 1986, 13) and Helen Cooper, while Kathleen Blake and Antony Harrison alternatively emphasize Wordsworthian elements in the poetics of Aurora Leigh. Margaret Reynolds considers Barrett Browning’s general adherence to the ‘tenets of Romanticism’, yet again singles out only Wordsworth among the poets (AL 13).