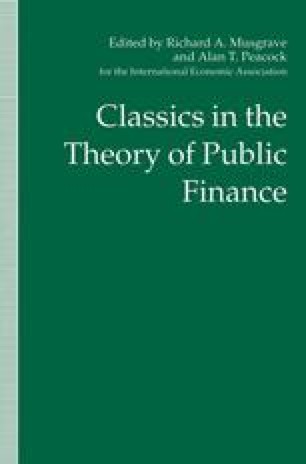 On Taxation in General

The public domain may well in the future furnish the public treasury with more abundant receipts than it does now, but taxes will long, if not forever, remain the principal source of public revenue. Hence the study of tax questions is perhaps the most important part of the science of public finance. What is the best tax system, not only for the exchequer but for society itself? What are the consequences of various taxes for the fortunes of the taxpayers and for the relative position of the various classes of the people? What is the effect of taxation, not only on the citizens’ material output, but on their very freedom and way of life? All these are so many questions which must be probed and to which it is desirable that we should find an answer.

Public Work Public Debt Insurance Premium General Cost Government Employee
These keywords were added by machine and not by the authors. This process is experimental and the keywords may be updated as the learning algorithm improves.
This is a preview of subscription content, log in to check access.