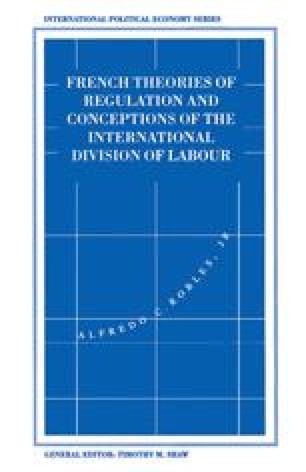 From Internationalisation to Regulation

The expansion of multinational companies’ activities in the 1960s and the 1970s sparked off an intense debate among French Marxists on the theme of the internationalisation of capital (for surveys see Andreff, 1985; Busch, 1981; Leucate, 1973, 1975a, 1975b, 1975c; Poulantzas, 1973; SIFI, 1974). They rejected the ‘microeconomic subjectivism’ of neoclassical analysis, which analysed the dynamics of multinational expansion exclusively in terms of the needs and problems of the multinational corporation. Aglietta took an active part in the French debates, but his contributions (Aglietta 1975, 1977a)1 have for the most part been ignored (except for Davis, 1978, p. 253 and Jessop, 1990).

Multinational Corporation Wage Relation Wage Labour International Division Labour Power
These keywords were added by machine and not by the authors. This process is experimental and the keywords may be updated as the learning algorithm improves.
This is a preview of subscription content, log in to check access.

Cite this chapter as:
Robles A.C. (1994) From Internationalisation to Regulation. In: French Theories of Regulation and Conceptions of the International Division of Labour. International Political Economy Series. Palgrave Macmillan, London. https://doi.org/10.1007/978-1-349-23260-4_6