Facing up to AIDS 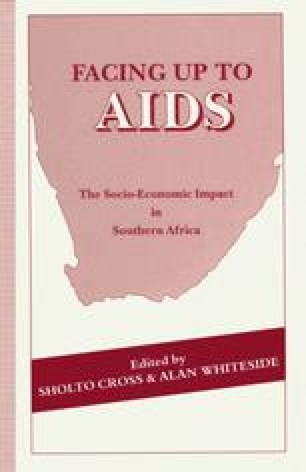 The Demographic Impact of AIDS on the South African Population

This chapter presents a general description of an actuarial model that has been developed as a means of predicting the future spread of the HIV/AIDS epidemic in South Africa, and to estimate the demographic impact of that epidemic. It provides a detailed description of the fundamental approach to the model, its structure, and the key assumptions used in building the model. In addition, this chapter aims to illustrate the application of the model in developing scenarios for the HIV epidemic in South Africa. Two specific scenarios are presented, and are used to illustrate certain issues of fundamental importance in understanding the dynamics of the HIV/AIDS epidemic in South Africa.

Risk Group South African Medical Journal South African Population Actuarial Model Demographic Impact
These keywords were added by machine and not by the authors. This process is experimental and the keywords may be updated as the learning algorithm improves.
This is a preview of subscription content, log in to check access.

Cite this chapter as:
Doyle P. (1993) The Demographic Impact of AIDS on the South African Population. In: Cross S., Whiteside A. (eds) Facing up to AIDS. Palgrave Macmillan, London