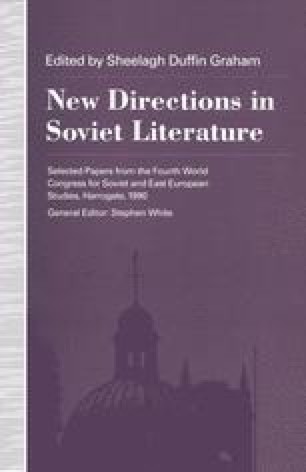 A Matter of (Dis)course: Metafiction in the Works of Daniil Kharms

Although Daniil Kharms spent most of his adult life writing independently of any artistic alliance or creed, his name is usually mentioned in connection with the literary group the ‘Oberiu’ (a distorted acronym of ‘Obedinenie realnogo iskusstva’, or ‘The Association of Real Art’).1 This group, whose official members were Kharms, Igor’ Bakhterev, Boria Levin, Konstantin Vaginov, Aleksandr Vvedenskii and Nikolai Zabolotskii, was particularly vociferous in its rejection of literary convention. One of their central claims was that literature in Russia should reflect the significant changes brought about by the October Revolution, principally by reflecting the aesthetic tastes of the growing proletariat. As the group put it in their ‘manifesto’:

The momentous revolutionary changes in culture and in life in general, so characteristic of our era, are being held up in the arts by a number of abnormal phenomena. We have not yet fully understood the irrefutable truth that as far as art is concerned the proletariat cannot be satisfied by the ways of the old schools, for their artistic principles go much deeper and undermine the very roots of the old art.

Language Game Russian Literature Textual Meaning Textual Strategy Aesthetic Taste
These keywords were added by machine and not by the authors. This process is experimental and the keywords may be updated as the learning algorithm improves.
This is a preview of subscription content, log in to check access.