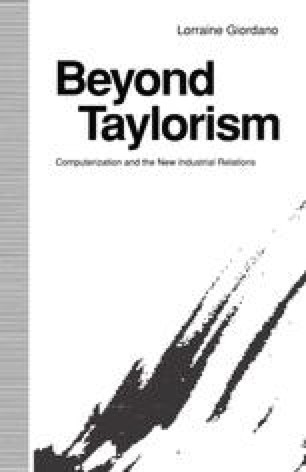 Historical Overview and Review of the Literature

Labour relations under capitalism have been affected by numerous social forces. The formation of labour unions, strikes, mass demonstrations and political unrest, immigration, and prevailing economic conditions have all had an impact on how corporations have responded to demands for change. The emerging bureaucratic reforms in the workplace — which Quality Circles are a part of — are not new. In order to understand the contemporary debate (and its often misplaced emphasis on industrial democracy and work reform), let us examine the historical programmes and bureaucratic changes which were often linked with the notion of democratic industrial reforms.

Collective Bargaining Labour Relation Scientific Management Historical Overview Quality Circle
These keywords were added by machine and not by the authors. This process is experimental and the keywords may be updated as the learning algorithm improves.

The Prince — ‘You’re mad, my boy, to go with those people! They’re all in the maffia, all troublemakers. A Falconeri should be with us, for the King.’

Tancredi — ‘For the King, yes, of course. But which King? ... Unless we ourselves take a hand now, they’ll foist a republic on us. If we want things to stay as they are, things will have to change. D’you understand?’1