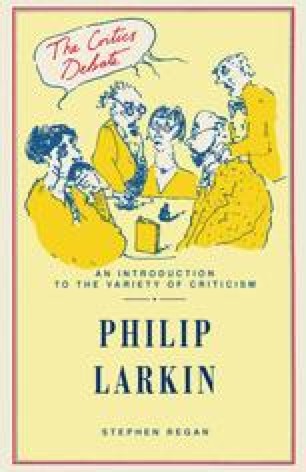 The End of Consensus: High Windows

Very few decades in British history have had such a distinctive social character as the 1960s, and the prevailing image of the time is still one of youthful rebellion and hedonistic pleasure. In some ways, however, the lively, colourful surfaces of the decade served to disguise rather than highlight its social divisions and often created a diversion from the grim economic problems of the time. In 1964, the year in which The Whitsun Weddings was published, a new Labour government came to power under Harold Wilson, promising to transform Britain through ‘the white heat of technological revolution’. The economic difficulties it faced, though, were insurmountable and the devaluation of the pound became inevitable. The Conservative government elected in 1970 proved no more capable of handling the economy and suffered a humiliating defeat four years later, amid widespread industrial unrest. By the early 1970s the post-war consensus of political opinion which had helped to establish the benefits of the Welfare State was clearly at an end, the lines of ideological conflict and division were becoming more obvious, and the country was facing a severe economic recession. High Windows, published in 1974, marks the end of consensus in a profoundly unsettling and highly polemical way.