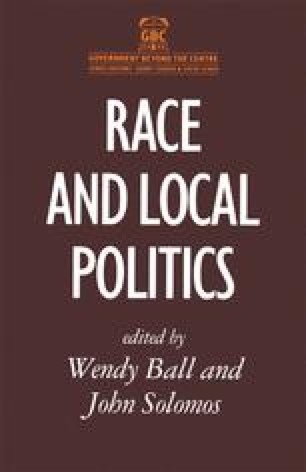 Chapter
Part of the Government Beyond the Centre book series

This book explores the central features of local political debates and initiatives about race and racial inequality in contemporary Britain. It provides a timely and authoritative overview of the main trends in this area and of developments in specific policy arenas, discussing the prospects for the 1990s, and suggesting avenues for further analysis.1

Local Authority British Society Local Politics Racial Inequality Racial Equality
These keywords were added by machine and not by the authors. This process is experimental and the keywords may be updated as the learning algorithm improves.
This is a preview of subscription content, log in to check access.