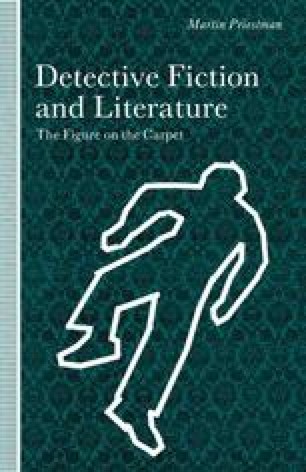 The other ‘founding father’ of detective fiction was the French novelist Emile Gaboriau (1833–73), who can be credited with creating the detective novel in the wake of Poe’s invention of the detective short story. In introducing Gaboriau, a certain amount of old-fashioned partisan literary-critical grumbling would seem to be in order. His novels are now very difficult to come by in English, and critics who discuss him in passing tend to move rapidly from acknowledging his invention of the detective novel to strictures on his failure to confine it tightly enough within some of its later limits. We shall see in the next chapter how this cardinal sin made Sherlock Holmes ‘positively ill’, in the first of the novels for whose broken-backed construction Gaboriau’s influence is, ironically, routinely blamed. The common charge is that he mixes tightly plotted ’pure’ detection à la Poe with other kinds of novelistic interest, and in particular with lengthy background narratives which virtually constitute novels within novels. That many of these complaints depend on received wisdom rather than first-hand knowledge is apparent in frequent confusions between his various books and between his two leading detectives, Tabaret and Lecoq.1

Romance Convention Family Romance Detective Fiction Common Charge Detective Interest
These keywords were added by machine and not by the authors. This process is experimental and the keywords may be updated as the learning algorithm improves.
This is a preview of subscription content, log in to check access.