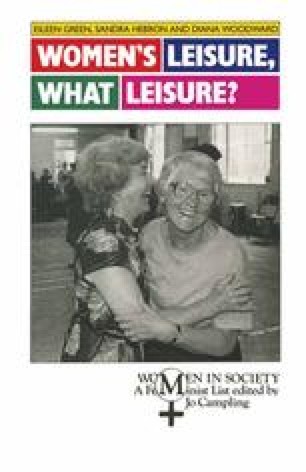 Chapter
Part of the Women in Society book series (WOSO)

What little we know about women’s leisure indicates that the activities women enjoy and do most frequently in and around the home are not much different from men’s preferred forms of leisure. The 1983 General Household Survey, a British government publication based on interviews with a representative national sample of over 10,000 women and nearly 9,000 men aged over 16, showed that 98 per cent of both the women and the men had watched television in the month period to the interview; 86 per cent of the women and 87 per cent of the men had listened to the radio; and nearly two-thirds of the respondents — 62 per cent of the women and 65 per cent of the men — had played records or tapes at home (see Table 4.10). Gender differences were more marked for reading, gardening, do-it-yourself, sewing and knitting: more women do reading and crafts, while more men do DIY and gardening. Another national survey of 2,000 people aged 15 and over, also carried out in 1983, likewise found that watching television and listening to the radio and music were the three most popular leisure activities, and were done by equal numbers of men and women (NOP, 1983). Again, reading books, knitting and sewing were more popular with women, and gardening and do-it-yourself were for men, with at least 20 per cent more of one gender than the other doing each of these activities.