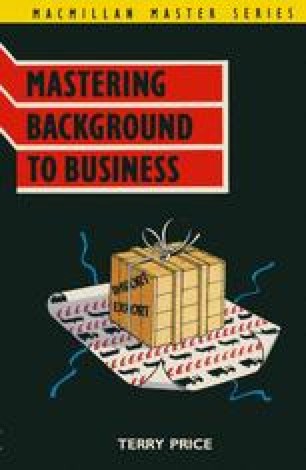 Very few countries can exist just using goods and services which they produce themselves, and therefore it is necessary for countries to trade with each other. This trading between countries is known as international trade. Britain, for example, cannot produce such materials as copper, gold and uranium, nor foods like oranges, lemons, tea and coffee, to name but a few, and it therefore has to import copper from Zambia, gold and uranium from South Africa, oranges and lemons from Spain and Israel, tea from India, coffee from Brazil. Britain, however, is a manufacturing country and exports goods such as vehicles and machinery to other countries. As you know, Britain is now a large producer of oil and some of this is exported. Britain also imports goods which it does produce; in recent years there has been a large increase in the imports of cars into Britain from Japan, Germany, Sweden, Italy and France. This is because often these countries are able to produce cars more cheaply than Britain and increasingly foreign cars are gaining a reputation for greater reliability.