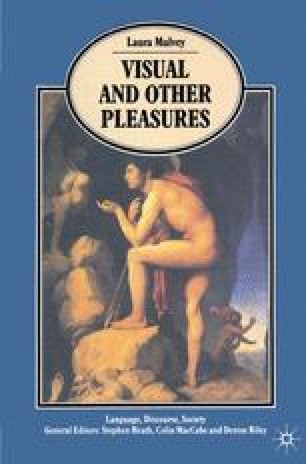 So many times over the years since my ‘Visual Pleasure and Narrative Cinema’ article was published in Screen, I have been asked why I only used the male third person singular to stand in for the spectator. At the time, I was interested in the relationship between the image of woman on the screen and the ‘masculinisation’ of the spectator position, regardless of the actual sex (or possible deviance) of any real live moviegoer. In-built patterns of pleasure and identification impose masculinity as ‘point of view’; a point of view which is also manifest in the general use of the masculine third person. However, the persistent question ‘what about the women in the audience?’ and my own love of Hollywood melodrama (equally shelved as an issue in ‘Visual Pleasure’) combined to convince me that, however ironically it had been intended originally, the male third person closed off avenues of inquiry that should be followed up. Finally, Duel in the Sun and its heroine’s crisis of sexual identity brought both areas together.

Sexual Identity Sexual Ambivalence Standard Edition Repeated Alternation Narrative Function
These keywords were added by machine and not by the authors. This process is experimental and the keywords may be updated as the learning algorithm improves.

Presented as a paper at the conference Cinema and Psychoanalysis held at the Center for Media Studies, SUNY, Buffalo, and published in Framework in 1981.