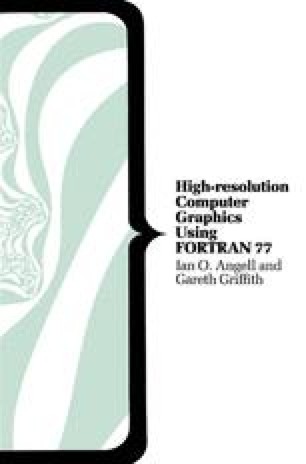 A facet which obscures all or part of another facet from exposure to a light source is said to cast a shadow onto this other facet. A shadow cast by a convex polygonal facet, J, onto another convex polygonal facet, I, is also a convex polygon which may be considered to lie on the surface of facet I. We call this polygon a shadow polygon. The amount of light reflected from a point in shadow was discussed in chapter 15: in this chapter we turn our attention to the finding and displaying of shadow polygons. We shall describe an algorithm which may be used to achieve this aim. This algorithm is merely an example to show how the problem can be tackled. There are many alternative solutions (Crow, 1977). The criterion for finding shadows is very similar to that for finding hidden surfaces and most hidden surface algorithms can be adapted accordingly. The method which we describe here is based on the general hidden surface algorithm of chapter 13.