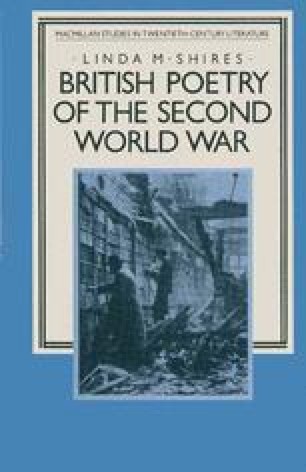 The Apocalyptics and Dylan Thomas

Looking ahead to the 1940s in her last novel, Virginia Woolf feared that the new decade would stifle imaginative activity with a chaos worse than any she had ever known. Looking back from the vantage point of the 1950s, however, the poets and critics of the Movement saw only an imagination gone wild. Woolf’s genuine uncertainty about the immediate future led her to pose searching questions in Between the Acts; yet retrospection only seemed to endow the fifties commentators with security. The labels and paradigms they applied to the decade behind them were convenient but incorrect. Their characterization of their precursors was, above all, an act of dissociation.1 Desiring to ‘restore’ a native poetry marked by restraint, logical argument and a realistic adherence to common life, the poets of the fifties insisted that the forties was a decade of punch-drunk apocalyptic writers, a time of irrational excess, a poetry solely of myth and dream. They dismissed the period as drowning in the illogical unconscious storms of such poets as Henry Treece, J. F. Hendry, and Dylan Thomas.

Movement Critic Intricate Image British Poetry Religious Revival Irrational Excess
These keywords were added by machine and not by the authors. This process is experimental and the keywords may be updated as the learning algorithm improves.
This is a preview of subscription content, log in to check access.