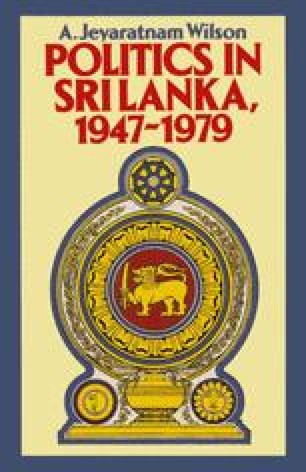 Sinhalese Buddhists regard Sri Lanka as their land in which must be preserved theravada Buddhism in its most pristine form. Many Sinhalese Buddhists believe that the future of the Sinhalese race is tied up with the very existence and continuance of this kind of Buddhism. Hence their antipathy to powerful minority groups such as the Tamils (Ceylon and Indian) and the Roman Catholics.

General Election Political Party Prime Minister National Government Trade Union
These keywords were added by machine and not by the authors. This process is experimental and the keywords may be updated as the learning algorithm improves.
This is a preview of subscription content, log in to check access.