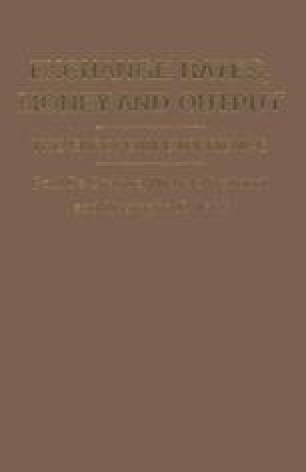 The 1970s and the early 1980s have been years of economic turmoil for the European countries. Some difficulties originated from changes in the structure of the productive system; others from financial disturbances. This book has dealt with some aspects of these difficulties. In the first part of the book we directed our attention to the supply side of the economy, and asked the questions how and to what extent the supply of manufacturing output in a group of European countries was affected by changes in the terms of trade, changes in the tax burdens and by unanticipated inflation. As a framework of analysis we developed a theoretical model of the supply side of the economy along the lines of the well-known Lucas model extended to an open economy. The empirical results of the model indicate that changes in relative prices, in particular terms of trade, taking place during 1973–4 and 1979–80, had a strong negative effect on the supply of manufacturing output in the six European countries under investigation (Belgium, France, Germany, Italy, Netherlands, and the United Kingdom). We also found that in a number of these countries the concomitant increase in the tax burdens (social security taxes, personal income taxes) aggravated the problems posed by the terms-of-trade shocks. These increased tax burdens discouraged the use of labour in the industrial production process.