Introduction to the Sociology of Development 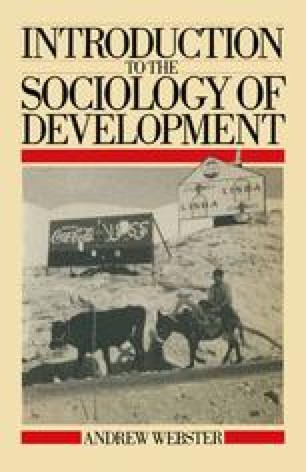 Introduction to the Sociology of Development pp 188-205 | Cite as

We have seen throughout this book that different conceptions of ‘development’ exist and that the explanations for world inequality and chronic Third World poverty differ significantly as one goes from one school of thought to another. Since the ‘problem’ of development is defined differently we are presented with a range of answers to its resolution. We saw, for example, differing conceptions of the ‘problems’ of population, aid, and political instability, a lack of industrial growth and so on. The competing viewpoints of modernisation theory and underdevelopment theory have framed the greater part of the substantive topics presented in the different Chapters. We have also seen how a third approach, that of the ecological, populist critiques of development must also figure in any consideration of development issues, and hence we confront new ‘problems’ such as runaway industrial growth, inappropriate technology and so on. However, we also argued (in Chapter 2) that notions of ‘development’ are based on differing value judgements and assumptions about ‘need’ and that those of the theorist or expert may often be out of tune with the aspirations of the people on the receiving end of development policy.