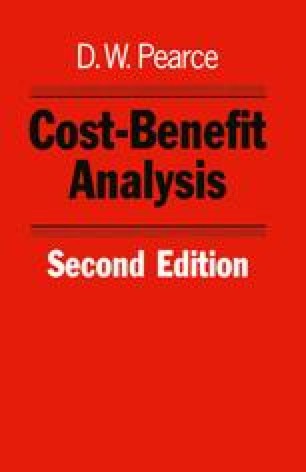 Chapter
Part of the Studies in Economics book series

In the basic cost—benefit formulae presented so far we have assumed that the costs and benefits are known with certainty. In practice, this will not be true, and we can distinguish two situations. The first is in the context of risk in which we will know the probability that the benefit or cost will take on particular values. For example, a cost in a given year may be 100, 200, 500 or even 1,000. To each of these values we can attach a probability, say 0.2, 0.5, 0.2 and 0.1 respectively. This means that we judge there is a 20 per cent chance of the cost being 200, a 50 per cent chance of it being 200, and so on. We thus define a risk context as one in which the probability distribution is known. The second context is one in which we do not know the probabilities attached to the sizes of the costs or benefits, but in which we do know the values that the costs and benefits could take. In this case we would know, for example, that the cost in a given year is 100, 200, 500 or 1,000, but we do not know what probabilities to attach to each of these possibilities. This context is defined as one of uncertainty.