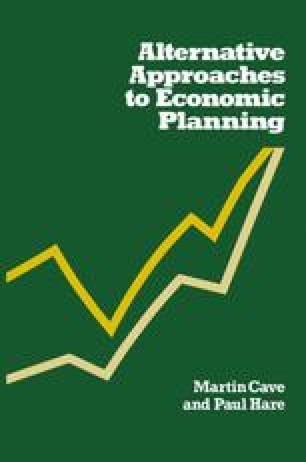 This chapter describes in outline how centrally planned economies allocate resources in their traditional mode of operation, before the reform movement of the past fifteen years. Essentially, we shall describe the economic system which began to operate in the Soviet Union in the late 1920s and early 1930s and which was transplanted to the other centrally planned economies of Eastern Europe in the late 1940s. The terminal date for this system is a matter of some controversy. Over the past fifteen years some centrally planned economies have moved decisively away from the traditional system, while others have clung to it with relatively small modifications. These changes are discussed in the next chapter, which focuses upon economic reforms. Our objective in this chapter is to describe an ideal type of traditional centrally planned economy. Although detailed institutional illustrations are often drawn from the contemporary Soviet economy, they are taken from those parts of it on which economic reforms have not substantially impinged. The use of the present tense throughout the chapter should not necessarily be taken as meaning that such an economy still exists in its pure state. (Few specific references will be given in this chapter. For a more detailed analysis, the reader is referred to the following: for the Soviet Union, Nove (1977), Gregory and Stuart (1974), Berliner (1976, chs 2-5); on Eastern Europe in general, Kaser and Zielinski (1970); on Poland, Montias (1962).