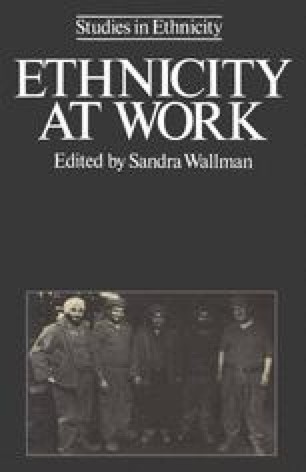 The statement that a relatively high percentage of South Asian women (Indian, Pakistani and Bangla Deshi) are involved in home-work or out-work1 in London is supported by the evidence of research in south London and by verbal and written reports from other parts of the city (Bolton, 1975; Brown, 1974; Shah, 1975). But for a number of reasons it is difficult to prove or quantify such a statement. First, by its nature, the work cannot be officially enumerated. In the terms of the formal economic system, much of it is illicit, and both employers and employees may be unwilling to discuss it at all. Second, the lack of a common workplace for employer and employee and the wide geographical distribution of each employer’s work make it impossible to cover an entire firm or even to contact all homeworkers employed by it. Third, direct communication between employer and home-worker is minimal and the tracing of chains of home-workers working for the same employer and/or living in one geographical area is hindered by lack of communication between sections of the Asian population.