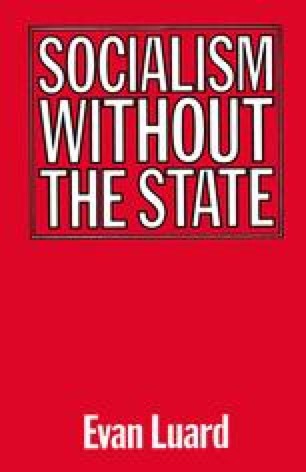 The Omnipotence of Organisation

Most history is about the growth of organisation: the progressive attempts of human beings to manipulate and organise each other in ever more complex ways. The primeval family, with only a handful of people seeking to meet all their own needs, gives way to the hunting horde with a dozen or twenty members, still only loosely organised. The pastoral tribe and the agricultural village, each with a hundred or two people, living as self-sufficient communities, give way to the more complex structure of the city-state, with a population of several thousands and an increasingly complicated division of labour. This in turn is replaced by the first empires, controlling much larger territories and extensive populations, regulated by the first legal codes and administered by a large bureaucracy of officials. Finally these in turn yield to the modern state, which gradually takes under its control more and more areas of human activity, establishes a vast apparatus of administration, and lays down a huge network of detailed regulations and controls on every citizen, while at the same time economic organisations, whether or not controlled by the state, also become ever greater in scale and ever more remote from those who work within them.

Collective Interest Socialist Society Personal Power Military Dictator Collective Power
These keywords were added by machine and not by the authors. This process is experimental and the keywords may be updated as the learning algorithm improves.
This is a preview of subscription content, log in to check access.