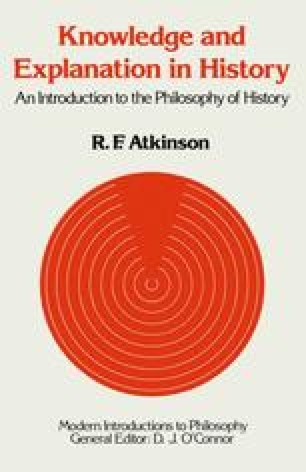 Knowledge and Explanation in History pp 140-187 | Cite as

The aim of this chapter is rather like that of the previous one, which was to enquire whether there is anything special about explanation in history. Here the same sort of questions will be asked about causation. Do historians have a special conception of it? Are they more interested in certain sorts of cause than in others? Is there objectivity in their causal assessments? Inevitably there will be some overlap with the earlier discussion but it is, none the less, better to attempt separate treatments. There are, in the first place, some questions specific to causal explanations. Second, to begin, as we have done, with a consideration of explanation generally, without commitment to the idea that explanations are inevitably or usually causal, at least avoids begging the question against the possibility of rational and narrative explanations.

Causal Explanation Regularity Theory Causal Assessment Causal Claim Rational Explanation
These keywords were added by machine and not by the authors. This process is experimental and the keywords may be updated as the learning algorithm improves.
This is a preview of subscription content, log in to check access.