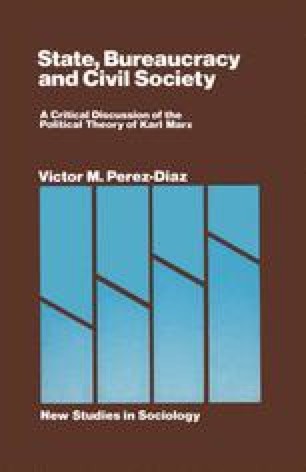 A Theory of the Polity and the Bureaucracy

Chapter
Part of the New Studies in Sociology book series

What is the general theory of politics and bureaucracy in capitalism which is implicit in that empirical discussion? My response is that Marx’s analysis implies (or points at) a theory of politics which would be isomorphic with his theory of economics. He gives us the materials and the orientation to construct a theory of the structure and functioning of a system of production and circulation of ‘political resources’ similar to the theory of the structure and functioning of the capitalist economy — and, by the same token, a theory of the transformation of the system (or the transition from one regime to another) and of its effects (or ‘functions’) in the larger social system.

Civil Society Political System Liberal Democracy Capitalist Development Capitalist System
These keywords were added by machine and not by the authors. This process is experimental and the keywords may be updated as the learning algorithm improves.
This is a preview of subscription content, log in to check access.