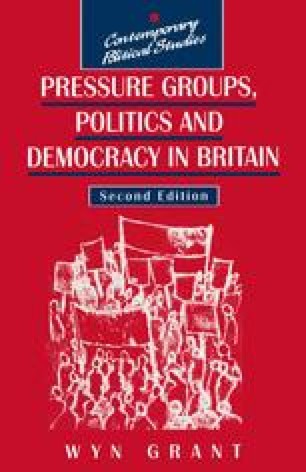 Pressure Groups, Politics and Democracy in Britain pp 80-97 | Cite as

Exerting pressure outside Whitehall and Westminster

Although much pressure-group activity is directed towards the executive and Parliament, many important activities take place outside Whitehall and Westminster. Pressure groups are potential competitors with political parties for members and influence, and this chapter reviews the nature of the relationship between the two. As the mass media have established a more central role in the political process, as older political structures have declined in importance, securing media attention has become a central pressure-group activity. Some pressure groups are making increasing use of the courts as a means of securing their objectives. Changes in local government towards a greater emphasis on partnership relationships are opening up new opportunities for pressure groups to participate in policy formation and implementation.