Politics and Society in Contemporary Africa 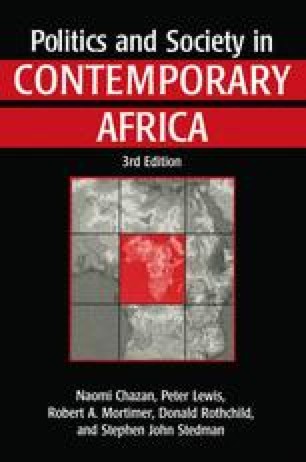 Politics and Society in Contemporary Africa pp 107-133 | Cite as

Ethnicity, Class, and the State

Our political interaction approach emphasizes the complexity of the group demands that the African state faces. It assumes a constant engagement of rival interests in the contemporary political arena, an interaction among various groups mobilized to secure public resources from those in authority. These groups—based on ethnicity, region, race, gender, religion, generation, class, and so forth—may be distinct in terms of origins and appeals, but they share common features in the way they organize to engage in a dynamic interplay of conflict and collaboration. In some instances cultural communities succeed in uniting people for some of the primary purposes of existence—cultural fulfillment, belongingness, psychological and physical security, and social intercourse; where this occurs, such communities can play an important role in gathering group members around an intermediary for the purpose of making collective demands on state decisionmakers. The range of these demands varies considerably. Not only do group representatives lay claim to a full share of public political power, protections, economic resources, administrative positions, contracts, awards, and scholarships but they make appeals, sometimes more conflict-laden in their effects, for broad grants of political autonomy and independence.