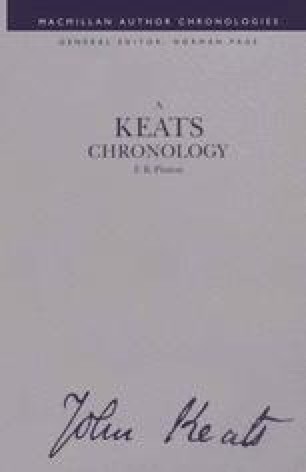 Whether Thomas, father of John Keats, came from Devon, as Brown and Dilke, two of the poet’s friends, declared, seems very uncertain. There were many Keatses — the name assuming various forms — in the south of England, and in the latter half of the eighteenth century they were to be found as far west as Devon and Cornwall. He was born either in 1773 or early the next year. By the age of twenty he was in charge of the stables at the Swan and Hoop, an inn near London Wall and the open space of Lower Moorfields, only a mile or so north of the main London business area. It was one of the properties of John Jennings, who had purchased his freedom of the City, lent and invested money, and become prosperous. The inn provided meals; the stables, accommodation for the horses of business men, who were driven in their coaches from country houses in the region to the north between lower Epping Forest and the hills of Highgate and Hampstead to the west.

Sore Throat Royal Academy Sunday Morning Paradise Lost Great Poet
These keywords were added by machine and not by the authors. This process is experimental and the keywords may be updated as the learning algorithm improves.
This is a preview of subscription content, log in to check access.