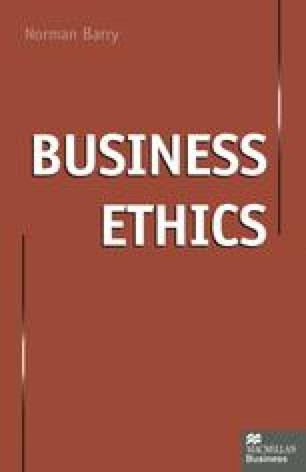 Business ethics as an academic discipline is a comparative newcomer to the typical university curriculum, and one which was at one time geographically limited to the United States; though, of course, the ethics of business, the morality of capitalism, the profit motive and the justice (or injustice) of free markets are topics that have been explored repeatedly since the beginnings of the commercial civilization in sixteenth-century Europe. Capitalism itself may be said, not inaccurately, to have a morally tainted biography in that its mainsprings tend to derive from the baser human motives, self-interest and the desire for personal profit. Its success, to many people, seems to depend on the suspension, if not outright rejection, of those moral constraints on individual gratification that are said to be integral to Western morality. Furthermore, the cultivation of some of the traditional moral virtues, honesty, integrity, self-sacrifice and the charitable instinct, seems to be hampered, if not made impossible, by the competitive impulse which is the driving force of the enterprise of business. Many people would regard the peroration in favour of ‘greed’ (a motivation to be cultivated to the exclusion of conventional moral imperatives) delivered by the Wall Street arbitrageur, Ivan Boesky, to a group of business students in 1986, as only a slightly hyper-bolic description of the egoistic psychology and amoral attitudes that drive the business community. Boesky said that: ‘Greed is all right by the way. I want you to know. I think greed is healthy. You can be greedy and still feel good about yourself’1

Business Ethic Moral Philosophy Business Enterprise Moral Duty Imperfect Market
These keywords were added by machine and not by the authors. This process is experimental and the keywords may be updated as the learning algorithm improves.
This is a preview of subscription content, log in to check access.