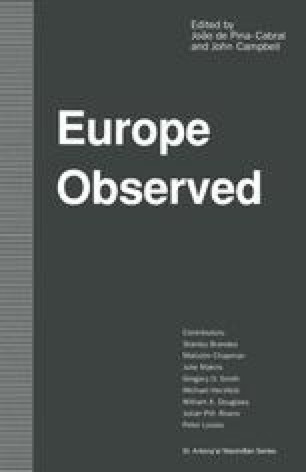 Anthropological Methodology in the European Context

Bernard S. Cohn, in a seriocomic look at the relationship between what he termed ‘anthropologyland’ and ‘historyland’, raises many profound questions that are particularly germane to the anthropological enterprise conducted within the European peasant village context. Cohn (as have others) notes that anthropology emerged as a function of European colonial expansion, particularly during the early twentieth century and the subsequent spread of American political hegemony in the aftermath of the Second World War (Cohn 1980: 202–5).

European Context Europe Observe Modern World System Profound Question Annales Historian
These keywords were added by machine and not by the authors. This process is experimental and the keywords may be updated as the learning algorithm improves.
This is a preview of subscription content, log in to check access.