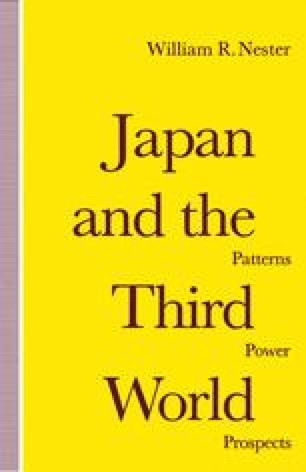 As in other aspects of Japan’s political economy, there is a large gap between the stated principles (tatemae) upon which Japan’s foreign aid is based and the reality (honne). Since the 1950s Tokyo has repeatedly declared that Japanese aid was aimed at developing poor countries and fulfilling Japan’s obligations as a member (otsukiai) of the international community (kokusai shakai). Tokyo has continually pledged its support for international organisations like the United Nations General Assembly (1960), the Development Assistance Committee (DAC, 1965), the United Nations Conference on Trade and Development (UNCTAD, 1964) and the Pearson Commission (1969), all of which have advocated that industrialised countries give 0.7 per cent of GNP in Official Development Aid (ODA) and a 1 per cent transfer of resources to developing countries.

Japanese Firm Asian Development Bank Japan International Cooperation Agency Development Assistance Committee Export Credit
These keywords were added by machine and not by the authors. This process is experimental and the keywords may be updated as the learning algorithm improves.
This is a preview of subscription content, log in to check access.