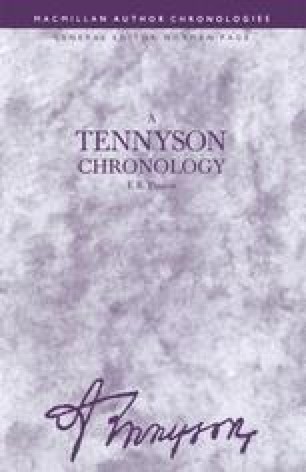 The Tennysons, thought to be of Danish origin, seem to have settled first in Holdemess, the region east of Hull. Their descendants belonged mainly to small yeomen and professional classes. Michael T, an apothecary at Hedon, married the heiress of the wealthy Clayton family who owned most of Grimsby before its development, and claimed descent from holders of the d’Eyncourt baronetcy. Their son George (1750–1835), the poet’s grandfather, became a solicitor (like his grandfather), set up practice at Market Rasen in Lincolnshire, and married Mary Turner of Caistor, a. gentle, devoted, devout, and artistically inclined young woman. George inherited his father’s wealth and property, and showed and transmitted some of the Clayton hotheadedness and temperamental instability. He was a shrewd business man, learning much as a legal consultant on land enclosures, and acquiring land on favourable terms whenever he had the opportunity.

Trinity College International Exhibition Favourable Review Prince Consort Crystal Palace
These keywords were added by machine and not by the authors. This process is experimental and the keywords may be updated as the learning algorithm improves.
This is a preview of subscription content, log in to check access.