British Entrepreneurship in the Nineteenth Century 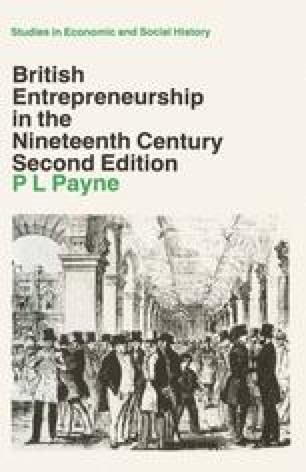 British Entrepreneurship in the Nineteenth Century pp 21-28 | Cite as

The Entrepreneur: Origins and Motivation

In 1948 Ashton showed that the pioneer industrialists ‘came from every social class and from all parts of the country’ [172: 16; see also 204: 376–82]. Although subsequent enquiries [notably 73; 84; 85; 108; 164; 174; 189; 194; 226] have vastly increased our knowledge of this entrepreneurial class and its geographical, social and occupational origins, generalisation regarding the relative contributions of each distinguishable group remains hazardous. Crouzet’s estimates are undoubtedly the best and most comprehensive yet devised [181]. By collecting the overwhelming majority of the published data about the origins and careers of the men who pioneered the new industrial system, and by employing in their analysis realistic definitions of such concepts as occupation and social class, he confirms the growing belief that only a relatively small proportion of ‘the true industrialists, the founders of relatively large undertakings’ [181: 139] came from the upper class or the lower orders. Recruits from the middle ranks of society, frequently with mercantile connections, appear to have predominated. Crouzet reveals that although many of the early industrialists had humble — though not proletarian — backgrounds, upward social movement did take place on such a scale and in such a way that it is possible to speak of the self-made man; that ‘rags to riches’ is not entirely a myth; that there was intra-class if not inter-class mobility.